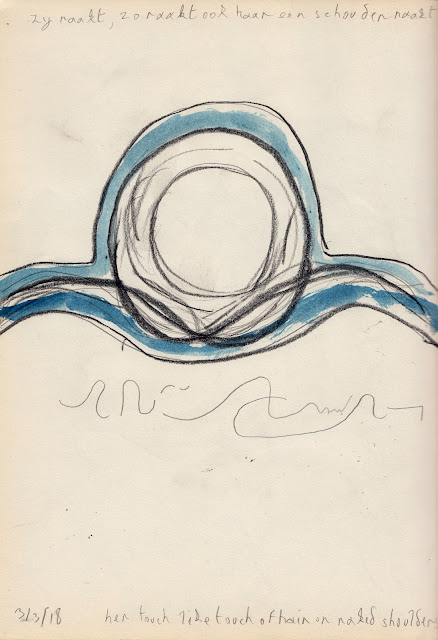 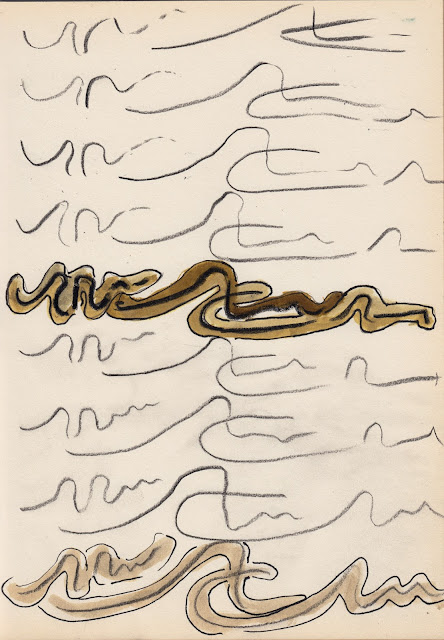 resulting Dutch poem: https://dirkvekemans.com/2018/03/03/zij-raakt-zo-raakt-ook-haar/
There’s a somewhat new approach here.
You know the saying: the best work on the computer is done away from the computer? Well, i’ve tried to to do this here: putting more attention in trying to establish the lyrical motion, the ‘phrase’ as it happens in your brain more decisively before starting to write, so the writing is more deliberate and slower, trying to ‘follow’ the lyrical lead.

It involved more controlled breathing as well, so i ‘m getting closer to meditative practice and sure it shows.

Looking back at what happened yesterday, i’m thinking about the assumptions that underlie the thought that anything ‘spontaneous’ and ‘unmeditated’ or ‘subconscious’ is or should be  happening quickly so in order to reach that domain, we should engage in quick flows of spontaneous gestures.
Acting silly so to speak.

Now in my practice of ‘Meditation Writing’ i have discovered there’s a whole dynamism of tempi involved and a fast tempo usually indicates there’s more thought present that you need (or want) to get away from. So the intuitive grasp of linking ‘spontaneous’ to ‘fast’ is perhaps very misleading and mostly the more you slow down the deeper you get into the un-conscious.Open up the gate that you are, instead of trying to squeeze everything through.

Also, when slowing down like this i notice that one gets more in touch with a notion of circuitry, a sequence of passing through gates of intensity. There’s this sense of an enfolding landscape, space.

Using the resulting ‘gignogram’ of the lyrical movement (the brownish curls in the drawing) very consciously as a structuring lead, a building method  in composing the poems works very well for me. Sure there was lots of ‘ravishing’ things going on while making it, but the making of the text was very conscious and technical. You should be aware that the textual composition is following very strict formal restraints: there can be only 10 lines of 10 syllables each, divided into two mirroring stanzas of four lines with a two line ‘stretto’ in the middle. The idea being that each line starts of a wave that is repeated fuga-like in the following verses and then ‘set free’ in the stretto. The ending four lines than try to gather the 4 lyrical phrases and close them one by one, so you have this unfolding and (re)folding effect. (in the English version nothing much survives the translation effort, i’m afraid).

I think it is save to say that doing this exercise will almost undoubtedly (in each case) lead to a text that is in some way satisfactory to me as an author, so in this case, and with the cautionary advice that this only is certified  to work for me personally, i can conclude that i can now  deliberately engage in the activity of writing an acceptable poem that functions in the whole of my writing. In other words: i can decide to write a ‘good’ poem any time, on command. The claim should of course be tested in a controlled environment, i will get to that.

It sure shows in my resistance in starting the process, it already feels like a job that needs to get done. An extremely pleasant task, but a task nonetheless. Once you start the routine, i feel  there’s no way out except failure or ending it.You can decide to do it, but you have to commit yourself for almost an hour of very intensive labour.

It’s very sensual, this one actually felt quite orgastic, so there was a strong sense of ‘inescapable urge’.

Well it can’t very much come as a surprise that any instance of a ‘lyrical event’ ‘comes down to’ a variant of an orgastic experience.

Why do I commit to these experiments?

Well perhaps in the first place  to demystify the creation process of lyrical poetry, while studying the nature of  what we denote with ‘lyrical’, how one could qualify a movement or event as ‘lyrical’, etc.How can we proceed in any sensible way with setting out what it is that makes us ‘human’, what differentiates our activities from artificially engineered ‘pleasing’ use of language or ‘poetry’ if we don’t cut the crap when trying to describe what actually happens during the creation process.

I’m old enough now to be sure that my writing has at least some ‘lyrical’ value so i’m using what i normally do  to established a controlled way of arriving at similar results. I don’t think it will be satisfying for writers after me to have me dead and gone stating that ‘well yeah i had some visions and waw-experiences and then i wrote all of these masterpieces overnight, so kiddo just you read my poems and  generally mess up your live and perhaps perhaps you will become a great writer yourself if mommy Muse will have you that is’.

So  no: cut the crap and try to establish what actually happens when this lyrical shit hits the fan…

So to put it straight: i commit to these experiments in order  to establish a technical apparatus and a controlled experimental environment to rationally investigate and communicate what we do not understand or cannot explain concerning the ‘lyrical’.

English version of the resulting poem*:

she touches thus a touch of hair denudes a shoulder
she speaks thus grass addresses feet
she smiles thus light slips loose in ponds
she touches me and thus she gets her name
of her nowhere a memory is kept
where she happens what happens is perplexity
a lock of hair gives the shoulder its being
feet explain caress to grass
the ponds hold his freedom to the sun
she only writes her name at full moon
*not being a native speaker, i can’t really do this, but it may serve its purpose