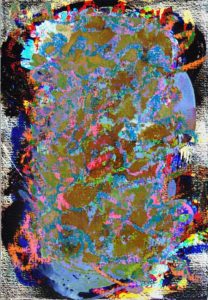 she starts again at zero
a zero which appears as nothing but which she will carry as a cipher.

Women diffuse themselves according to modalities scarcely compatible with the framework of ruling symbolics.

Woman’s behaviour has therefore been coded according to laws of exclusion.
This has had unanticipated consequences. For her stealthy gestures, body and mutterings have slipped out from his language and inadvertently into the workings of the war machine.

She is the sphinx that has no secrets.
(She is a clod of fine soap wrapped in rough white wool.)

Her survival now depends on the military deployment of bastardized versions of his appropriation.Wars will be waged, fruitful lands be laid bare to scorching fire.

Serpentine tactics
are the mappings of her imperceptible advance. She marks her lines through geological cuts, metallic intrusions, technical scars. As these wounds heal, it is the crusts that are felt by the fingers of a trained hand. Tesserae.
Invisible to the strategy of the arborescent, specular war.

Minx
/min xs/ n. a. pert, sly, or playful girl.
Her maps cannot be read, her troops cannot be seen.
Scanners yield no image. Only touch will reveal, reactivate her meaning.

Forget Jocasta, forget Antigone, forget even Inanna. Head on East, in the Indian subcontinent KALI marks a different path. This is no secretive, intestinal exploration of muscle or meat. She is no such reservoir.

KALI is the sight of KALI.
KALI is the skin of KALI.
KALI is the eye in the middle of the eternal plane that is her surface that is KALI. Her eye is always on either side of the present, sucking up the past, enticing the future. KALI is always into it. Whatever it is, she intuits it all. If it is liquid, if it is turbulence, KALI is liquid turbulence.
Girls want to have fun. To amuse herself KALI gave birth by simple secretion to CHAOS and TURMOIL. We all know what happened to CHAOS. Her twin sister TURMOIL is the Hole of Wholes enticing the Outside. TURMOIL feeds on the fear of the inhabitants of the galaxies she feeds on.
From TURMOIL comes DURGA.
From DURGA comes CHIYOU.
From CHIYOU comes blood
raining from the skies
impregnating NUWA who secretly gives birth
to AUM CHIZOU who became known as
AUNT SIZZLE.

Awakening, she feels a slippage and she must strengthen her grasp. Focusing attention on the spot between her eyebrows she calls on her most prized and secret weapon. Moving like a disc in her head, metallic red, her third eye opens. She is born smoothly into the day and a war is won.

But is not over. K.’s intrusion into the ruling order of the day is a micro specifically planned intermittence. A cut through screen instigated by the gathering pace of radial spin. Her long and matted hair flowing wildly, her maddened laughter, her third eye scarlet, her greedy tongue, her huge hard teeth, her lips drawn back, her breast dressed by strings of severed heads with wild and awful faces.

Her garland was the intestine of the demon, her ornaments of bones in lust for blood and flesh. The earth trembled with her howling. She trampled heaven, earth and hell, crushed them beneath her feet.

Aimed imperceptibly against the organism, against the specular gaze, the reptile stirs. The third cerebral ventricle, home of the animal spirits, dismantles the human. The residual events of a blind weapon that defies sight. What remains are the traces of her rhythm, the smeared imprints of her movement– smooth skids–flatlines. A rhythm composed of speeds and slownesses.