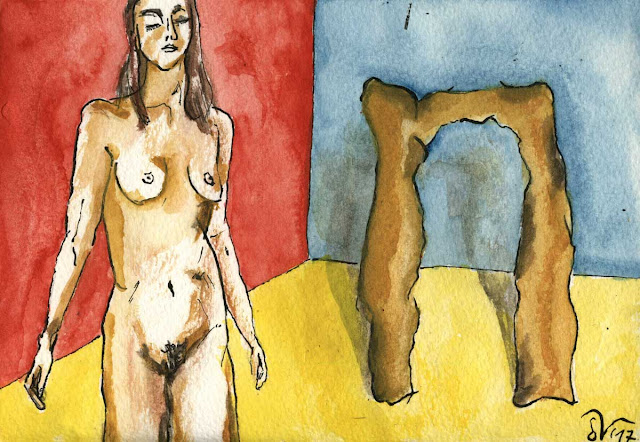 Warm thanks to wonderful Nele for modelling, please visit http://nele.nu!

written while listening, hearing, not-listening and listening in any order of those to this:

Some remarks on the absence of gestural traces in Machinic Writing

The gesture of writing

What is the initiating gesture of writing? (the program of) writing (in its init-phase) creates the canvas (white space) of writing, turns the surface of writing into the condition of writing (allocates the writing space its spatial co-ordinates and turns a surface into something-being-written-upon)[i].

This gestural aspect of writing is very basic to any writing. It binds it to archetypal configurations of the sacred. This is why Tae Ateh ( see http://www.utsanga.it/ateh-organic-potencies-of-asemic-writing/ ) is very right in her claim of asemic writing as an attempt to restore the unity of the sacred with the profane. When writing is enacted without a claim to semantic meaning, writing is reduced to its gesture, hence it also follows that it is logical to insist on this gestural dimension, or as she frames it:

“When asemic writing can explicate deep layers of pan-human (including pre-linguistic) consciousness, it should also carry some other features of our kind, not only mental but also physical: time duration, mortality, inseparability from environment. These “organic” potencies, as it appears to us, can be found in an asemic installation, based on the concepts of “a found object” and “an observer”.”

Or, to put it simple: if you want your writing to work, certainly when you are into Asemic Writing, make sure you do some actual writing!

The gestural enactment of writing always includes the activation of a writing system. In Asemic Writing this is also the case, only here the writing system is being invented in the act of writing: its apparent lack of any system can only be reached by a constant repression of the emergent system. It is in fact the tension between the emergence and repression of system and meaning that constitutes the intensity of the best works in Asemic Writing…

Further on in (the program of) writing the gestural implication consists in the systematic inscription of the writing surface, implicating motoric co-ordination and the whole of cognitive actions related to the inscribing (drawing) of surfaces.  Here the Derridean analysis has done much ploughing of the territory. But even there the meaning that is generated in the manual act of writing itself, is mostly neglected in favor of more logocentric unravelings of meaning. The text is of primordial importance, the autograph is only to be studied in order to produce a text-critical edition or as a secondary means to ‘reconstruct’ the supposedly original meaning of a text.  Well, let’s just call this  the Curse of Gutenberg, hihi.

The Husserlean Typewriter[ii] alienates the (initial and further) gestures by mechanic intervention, transforms the gesture from a sweet and smooth activity to the nag-nag-nag-ting of the typewriter, but it doesn’t change the status of writing itself.

In Mechanic Writing the gesture is phenomenologically alienated but structurally intact. This point can be proven easily by referring to the excessive amount of desire-production (fetisjism) surrounding typing machines…

What is deplorable in this context is that – to my knowledge – no-one ever took the trouble of investigating what the influence is of typewriting on the nature of writing produced in this way. IMHO the image of ‘printed’ writing made available by typewriters and the whole of gestural actions required to produce it has a tremendous impact on the quality of writing thus produced (‘quality’ here used with its philosophical sense, referring to the ‘qualia’).The writing actually improved and with it the thinking, which in turn led to better writing. No-one saw the consequences because, as always, people were only looking backwards for a unique Cause, explaining it all.

So instead, someone in Germany with a very bad conscience had a lot of theory about the terrible outcome of Mechanisation, an outcome that he alone imagined, perhaps because he had been in the habit of ripping people of their human characteristics in order to dispose of them mentally. Other people just loved the typewriter…

Now, loads of writing has been produced on the supposed influence of this new ‘book free’ situation, tons of horribly opiniating blabla especially on ‘poetry’, as if poetry is not part of writing and some special ‘thing’ on its own (perhaps because it is mostly only read by poets?), but it is extremely hard to find anything written on the lack of gestural traces in digital writing[iii].

Worse than this neglect is of course the horrendous neglect to discuss the economical effect of the advent of the ‘digital era’ on literary writing, but this is not the subject of this writing.

Machinic Writing needs to be accompanied by some sort of protocol differentiating the writing that is writing from the writing-that-is-code, constituting the canvas of the writing (the canvas of online writing is only very temporarily upheld by running code, it is runtime happening on a screen). For a machine any writing is code, just like sound or images or whatever you feed it, is code. It’s only the protocol (commonly indicated by file extensions) that decides what needs to be done with the code, turning some of it in images, or sound, or ‘writing’

The dependence on protocol of Machinic Writing to acquire its status of ‘writing’ , besides making a world of difference, also opens it up to the Inhuman. Any protocol can be mimicked (hacked) by Machinic processes and there is no reason to believe that Machinic ‘creative’ writing created without any human editorial actions will remain discernible from humanly created writing (work is underway to prove this point within the Cathedral) for any time much longer.

Concepts like ‘original’ writing’ and the status of the author in general urgently need to be redefined in view of Machinic Writing. Work being done by various authors in this respect is not really getting the attention it deserves, but hey it’s 2017, ti ta trumpera & all, so what is ‘urgent’ anymore…

Asemic Writing in the age of Machinic Writing

Much more remains to be said, and many have said most before me, like because of the lack of a writing surface, any writing online is always on the brink of collapsing into its ‘codeness’; it needs to be saved (into ‘files’), but even when ‘saved’ it only ‘exists’ during runtime. Of course, in Neo-Cathedralic terms, any ‘file’, ‘saving’ or even ‘existence’ is a metaphorical illusion. Existence doesn’t matter until it matters, untsoweiter…

Some very excellent authors[v] have spent decades in trying to get to grips with the nature of online writing, but almost no-one takes them seriously because we do not want to look beyond the comfort zone of writing as we think we know it. That will change soon.

Anyway, all of these aspects of online writing, including the problematic status of the author, have been and will continue to be the subject of Neo-Cathedralic Creative Research & Development (NKdeE CR&D)@ http://nkdee.be and Beyond…

dv @ the Centre of the Known Universe 2017/01/08 17:58
[i] cfr. Anne-Marie Cristin on the importance of white space of writing, laboriously prepared in “L’Image Ecrite ou la Déraison Graphique” (ISBN 978-2-0812-2890-0) and developed in “Poétique du blanc”, a book i couldn’t get my hands on yet.
[ii] everything that Heidegger, the ol’ nazi bugger, came up with,  he owes to Husserl anyway,who died in shameful poverty partly because of his unforgivable neglect, so i hereby officially strip him of all of his inventions and reattribute them in a what seems righteous what-to-do-with-Lance-Amstrong way.
[iii] i prefer the term Machinic Writing over digital writing because A) ‘machinic’ is broader than ‘digital’ and not restricting the use of algorithmic processing of text to the use of digits in representing it B) it more precisely differentiates algorithmically created writing from ‘Mechanic Writing’ and from ‘Manual Writing’ C) ‘Machinic’ is more clear in pointing towards the potentially ‘Inhuman’ nature of writing produced by A.I. algorithms.
[iv] there has been and will probably continue to be some confusion over these ambitions of some Asemic Writers. Initially the term ‘post-literate’ meant that Asemic writing points to a future (blessed be its Endings) where culture would resort to a purely visually organized writing, that would prove to be much more effective that all this mess with letters referring to sounds. Some Asemics took this to mean it was post-literature, so that as an Asemic you were writing after the end of literature. Looking at literature in its current state these gentle folk do have a point, but i think the potential of ‘inhuman’ creative writing is more of a real threat to all those nice blondes and tough guys punching out their ‘novels’ each year according to literary ‘guidelines’ made up by market research, facebook profiling research and sold as ‘writing workshops’
[v]  i think of Alan Sondheim see http://AlanSondheim.org here especially, but there are numerous others…