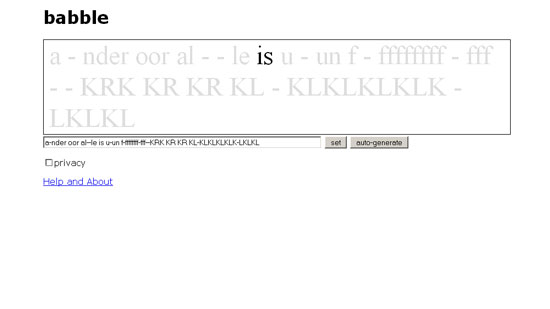 Babble is a system for authoring mechanistic sound poetry. It occupies a
space between speech and music, allowing play with the structure and
form of simplified phonetics. The visitor is encouraged to enter
nonsense verse, which is then immediately played back as synthesised
sound. Although babble’s phonetic system is quite unlike that of any
natural language, when faced with the text that generates the sound, the
listener has the sensation of ‘hearing’ speech.

Babble is written in the open source HaXe language, which compiles to
javascript and flash. The source code for babble is available under the
GNU Public License version 3 or later.

Alex McLean is a programmer and live coding musician. He is co-founder
of the dorkbotlondon meetings on electronic art
(http://dorkbotlondon.org), the TOPLAP organisation for the
proliferation of live algorithm programming (http://toplap.org) and the
runme software art repository (http://runme.org/). He is also a PhD
student at Goldsmiths College, within the Intelligent Sound and Music
Systems group.