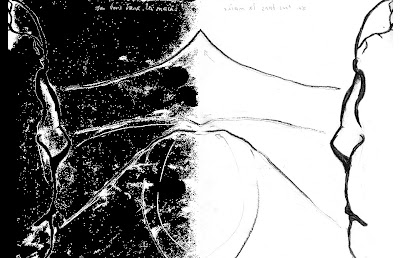 [text from a sephardic romance]

Our poetic impulse, our strongest intuition is to affirm life against any limitation, including, especially, in view of the countless historical disasters, religious reductionism of the free spirit to a transcendentally cloaked discourse of power.

Any affirmation of life precludes the affirmation of death plus the annihilation of consciousness, the improperness of any ‘after-life’, that can only be envisioned as a ghastly never-ending torment of pseudo-completion, as well as the idiocy of religious idolatry, personal god-creations, the attribution of uneasing troubles to demoniacla forces etc, although one needs to be lenient on purely ‘practical’ moral grounds, however little such leniency may have to be in accordance with a truly ethical position.

I mean: however ‘ wrong’ some blokes may be, you just don’t spit people in the face for being ethically adrift. In fact, in my view, the only vantage point allowed is a rectification by exemplum, acquiring the wanderer’s weak and faulty rhytm and working it the other way, all the time keeping strictly within your own ‘legal’ field of movement.
Within the future present of the other’s life, it’s kinda like a Star Trek thing: you don’t interfere, one can show but not touch, lest you corrupt the promise inherent in what is shown with the act of breaking the promise.

Unless you’re some kinda nutty saint, nobody will notice anything, don’t fool yourself, mohammed. But it’s the only ‘legal’ way and theoretically it is even possible.

Anyway, in spite of today’s fashionable ‘bleak destination’, including the ‘daring heroism’ of so many intellectuals staring Emptyness Itself in the eye (I, I, no I), any true immanent position today would require a serious reconsidering of what is too easily acquited as belonging to ‘idolatric transcendentalism’ or even plain foolish stubborness

For immanence as such _also_ necessitates a ‘mystic’ movement within its discourse, namely there where the ambivalence of the affirmative energies is used, metaphorically speaking, as the engine of pro-creating consciousness, uncut from the worlding spirals of pre-consciousness, on ‘purely’ virtual grounds, pre-individual if you want, albeit that the pre may be wrongly held as a signifier for an absent temporal order.

But of course this ‘immanent mysticism’ would de facto tune in nicely with any transcendental ‘traditional’ language/usage/method of acquiring ‘un-worldly’ knowledge. Extreme care is required in view of the strength and ruthlessness with which religious dogmatists have been able to recuperate any intellectual effort passed to us by these rare individuals and their testimonials of extreme experiences.

Furthermore, although a poetic method of investigation does not require any succes in a world that seems dead set on destroying itself anyway, regardless of any sense, common, poetic or otherwise, you might take care not to compound the already soaring insults of insanity and naïvity with any further association with the quacks and new agers of the scene, as it further succumbs into commercially orchestrated sickening whirlings of slime into slime into sour vomit.

It’s worth giving this line of thought and (daily) praxis a chance though: occasionally one does end up with a piece of strangely sharp and heavy matter able to soar right to the bottom of this global mess and make a sound that cuts through all the crap.