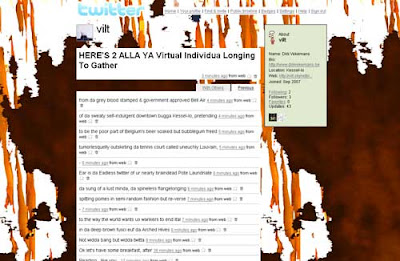 Netwurker Mez had a nice ‘essay’ using the Twitter interface yesterday.
i managed a small pome this morning, the interface isn’t much the thing
i’m dying to have a go at. I do recommend the Mez wurk there, try
www.twitter.com/netwurker

Otherwise the thing’s great to try out playing with the temporal shifts , modulating the writing/reading time ratio’s and turn the disadvantages of screen reading into a usable ‘quality’. Have the reader relax and be the sideways glancer that she wants to be, just picking up your planted message diacritically.

That’s what i was after anyway, Mez’s an entirely different story.

In general, there’s way too little things of this sort happening in the literary-net-performance way, or i’m not finding it. My English’s not up to anything much, i can crank out a wit or two but that’s about it, but surely those whose English writing capabilities would make things interesting have a certain literary reputation to uphold, exactly the same reason why nothing much is happening in the barely existent Dutch net scene.

Does it matter? hardly, but it would be nice to see some more of this experimenting with new interfaces. Not to establish new ways of writing, for that these things die out or transmute quicker then you can define them, just to keep things loose and open, give the general user some perspective on how to see this, broadly.

But then experimental authors have a tendency to scorn whatever’s general out there.