[text written today in response to a call by Tamara Lai] 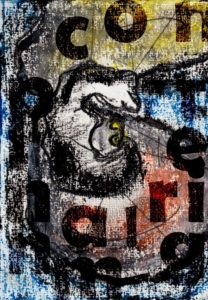 ‘Freedom’ for me denotes nothing much else than the sensation of feeling free much like ‘happiness’ may cause a myriad of quite contingent associations, but when you consider it more severely, it actually only ‘really’ denotes the sensation of feeling happy: the feelings are very real but the concepts themselves will never correspond to any other word than another word denoting a similar feeling, something that occurs and our response to it.
The idea of freedom, in my thinking, the concept, is always linked to the absence of the ability to feel free, so it’s a very negative notion, much like the idea of hope is always linked to the absence of the ability to feel happy. The words ‘freedom’ and ‘hope’ became/become ideals because the feelings they denote are absent and or blocked in the actual, and can only be longed for in the virtual, the distant future. Conceptually they function as ideals exactly because they call for future change or action in order to lift the blocks or fill the lacks on/of feeling free or happy that are perceived in the present.
Eventually, in my thinking, the discourses of hope and freedom are commentaries on a failure of ‘reality’, a lack in the fiction of ‘Being’.
‘Deconfinement’ , as far as i can tell, denotes the release of very actual and contingent previously imposed behaviour restrictions. Any such occurrence of ‘deconfinement’ will most probably cause a temporary surge in the feelings of happiness and freedom in the individual that is being ‘deconfined’.
From there one could argue that any specific occurrence of deconfinement may contribute to formulating better questions in the pursuit of the ideals of freedom and happiness, but precisely because any actual deconfinement is contingently linked to the very specific restrictions that were previously imposed, we should be very critical to identify any undoing of a restriction as a ‘road’ to freedom.
For instance, there is no reason whatsoever to believe that the ability to fly by plane to any location on earth is a ‘condition’ for the realisation of the ideal of ‘freedom’, just because some of us only manage to feel ‘free’ when they are allowed to do just that. In many ways these people can be said to be addicted to a false surrogate of ‘being free’.
Still, wherever deconfinement occurs we can/could actually measure which lifting of a specific confinement may cause what number of what kind of people to feel how much more free than before, and from such measurements we may attempt to provisionally describe what people in their actual conditions actually need to feel free.
From a viewpoint concerned with mental health I would suggest that repeated exercises in auto-confinement and auto-deconfinement are extremely useful in trying to establish our
actual needs so that we can adapt our behaviour accordingly and feel happy and free most of the time.