Being is an auxiliary.

Objects are fictional entities created to sustain the fallacy of human consciousness. Human mind cannot cope with Becoming without a continuous obsessive reification of how it is affected in the World, the Inside of the Event that has no Outside.

All is constantly being reduced to the illusion of everything, Eternity to fictitious Time, and the Event to a ludicrous display of causally connected Events, a comforting daisy-chain of calculable tiny Happenings, bread crumps to mark our pitiful Progress.

In fact there is no progress, there isn’t even any Advance, we are constantly at the still point of our Existence, for which there is no basis in Reality, for there is Nothing to get away from (“ex-ire”) let alone somewhere to go to. Ontology is the philosophical decision to deny Becoming in order to establish the power of the Word, a demonic order that negates life in favor of Being, growth in favor of Stasis and openness in favor of Closure upon Itself.

What we call objects, things, are in fact oscillations between information (coding as the kernel of life) and matter (the rigidity of flux in its moments of transition, death).  A chair, a plant, a person, a system, a concept: all these things that we have been taught to semantically trap within our (meta)linguistical communicative networks are mere subroutines within the ongoing process of the Event. As such all of these subroutines pass through 7 distinguishable stages most of which we prefer to deny in favor of the one stage of Integration where things ‘tend to be things’,  when they appear ‘as they should’ for our minds because we need to handle them as such. 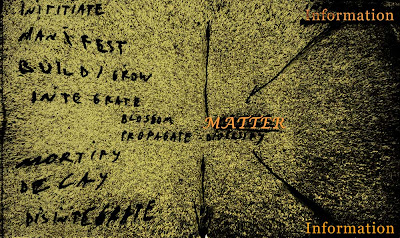 The differentiation of these stages is of course yet another instance of our need to reify, I cannot escape the laws of writing within writing (therefore every serious writing is suicidal, auto-destructive, writing contradicts itself because it has Nothing to say).What I can do is overcode my writing so that its contradictions are made explicit. Let it be known that any substantive that is capitalised here does not refer to a thing but to a subroutine within the Event.

In the absence of Time, there is no conceivable proof of the requirement of any specific order  of these stages, so let’s pretend the humanly understandable one is ‘correct’.

The first stage of any Thing situates within the realm of Potentiality, consistency planes running across and corroding the Integrity of the Event. Here,  any non-place at any non-time, the subroutines are instantiated. Here the subroutines are pure information, ready to be picked up by Energy to get materialised. Mind you, there’s nothing remotely platonic about this: these Things ‘are’ as much as manifest or Integrated Things ‘are’, and there’s nothing ideal about them either. They are simply code remaining within the dark matter of Potentiality until they are energized by some movement within the Real.

In the second stage Things become manifest, they appear into the Real except they may not look at all like what we name them. A chair may be manifest in a collection of sticks and boards, a plant within a seed, a person’s embryo may manifest itself, a feedback-cycle may be established generating an excess of functionality between parallel routines, a word may acquire an overcoded semantical content that is transfered throughout the integrity of a body of writing,.

Next, the Thing expands through the increase of energy it attracts and as it is being built or grown, there is a constant switching between its historical code of instantiation and the matter getting energized in its manifest form. This happens because all ‘natural’ code contains recursive calls upon itself, so any growth triggers further growth.

Then follows the blessed state of Things where things are truly Things: the stage of Integration where Things establish themselves, plants blossom, animals propagate, things communicate their ‘Being’ to their surrounding, a communication that may lead to further diversification of its routine. Here the oscillation from information to matter is at its material height which for some Things comes down to a near complete standstill. The chair ‘is’ truly a Chair. You can even talk about it as if  it is the actualisation of the Idea of a Chair.

The further the integration gets, the harder it is for energy to flow through the dead straps of matter. Here the process of mortification sets in. Rigidification within a person, for instance, is noticeable as a heightening of self-consciousness, the construction of a fictional inside opposed to a supposedly hostile outside, topologies that are then projected on the entire Becoming, in turn leading to further mortification. Death’s becoming is an avalanche.

From then on (for a person that is from its early adult life onward) all leads to further decay, and finally to complete desintegration where all matter is resolved into pure data ready to be taken up into the recycling process of information (‘garbage collection’). The initial information is not lost, it has been communicated to other subroutines (All is subject to the law of conservation of information).

It is easy to see how  a more detailed and  critical description of these stages of Being could lead to a successful new philosophical conceit of reified Becoming.