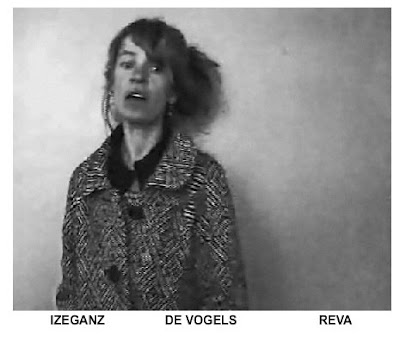 Note: Both the web-version and the gallery version are looped and start with a 20 second black nothing

About Plateau 13 of The Path of the Weeping Night

The code is to be used freely for non-commercial purposes. In fact everyone involved in this International Celebration of Russia’s foremost Modernist Poet would very much like to see some more ‘performances’ of existing code along the Path. Authors and performers are advised to go about this in a very free way, in fact throwing away the existing code might in some cases be a better way than trying to make something of it. Heck it’s in Dutch anyway.

There’s consistent rumours of a Great International Khlebnikov Carnaval to be held from august 11 to 17 , 2008 in Kessel-Lo, near Louvain in Belgium, so it might be a good idea to start thinking about your contribution right now.

Source code (in Dutch) for the Path is made available through http://khlebnikov.wordpress.com

In any case Dirk refuses responsibility for any damage to performing players or machines.”

This Plateau premiered at the *ZAOEM festival of Present Day Poetry in Gent earlier this april: http://www.krikri.be/zaoem

Please spread this message as you see fit.

To conclude here’s some lines from the master himself, from a longer poem
that sets out with “When autumn comes to turn the trees[…]then we think of spring and Mardi Gras!”:

“Good friends, arise! And stand prepared
to follow her with heaps of light
and woven strands of mist and flowers!
Wilder than the sea at dawn,
spread yourselves in streams across
the east and watch, enchanted by
the air’s blue escapades,
As dreams uncoil like waking snakes.
Iridescent as the flowers,
blown by the breath of human mouths,
Spring arises from her sleep,
all men who scrabble after profit,
who reckon days in gain and strain,
who reckon days in trade and coin,
all have joined the single flood
of love for the Virgin Spring, loyal subjects
sure her CARNIVAL will last forever.”

Velemir Khlebnikov – from ‘ The Poet’ transl. by Paul Schmidt

Please spread this message as you see fit.